“Taking an image, freezing a moment, reveals how rich reality truly is.”  — Anonymous

At the crack of dawn and while bleary-eyed, I was picked up by friend Ellen before Yuen Yee, our other travelling companion. The three of us were to meet our designated driver Edvin back at Ellen’s for our weekend cross-state border road trip to Cameron Highlands.

Both Yuen Yee, who unfortunately was nursing an upset stomach and I caught up with some rest and dozed off at the back shortly after we started our journey at 6:30am. We woke up almost two hours later just before we reached small town Bidor for breakfast. Edvin brought us to a coffee shop off the main touristy street that is famous for their yummy chee cheong fun (rice noodle rolls) and frequented by the locals. 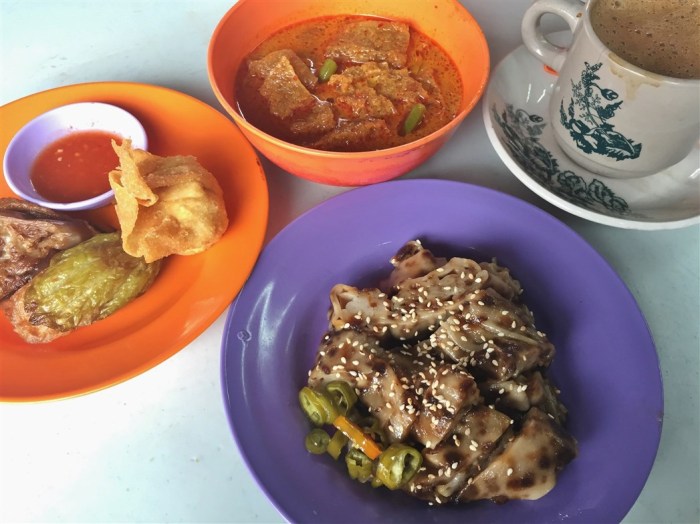 After 3 plates of chee cheong fun between Ellen and me and with the trimmings, we were sufficiently energised and ready to continue our journey. The temperature started to drop and the scenery began to change with the temperate climate vegetation slowly coming into view as we travelled further uphill on the windy road. The considerate Edvin tried to drive slowly through the short bends so that the two of us sitting at the back who are prone to experiencing motion sickness would feel easier.

Another hour later we took a break when we reached a waterfall, Lata Iskandar to stretch our legs and for some fresh air.

waterfall Lata Iskandar along the way from Tapah to Cameron Highlands, located about 25km before Ringlet

The longer break was at 10:30am when we took another pit stop at the first tea plantation we encountered. The Cameron Valley Tea Plantation is by the road side and the green span of tea plants were beckoning.

I got out of the car, took my cross body travel pack and was ready to explore while my 3 companions tackled their heavy bags from the boot. In this small party of 4 I was no doubt the odd one out as the others are avid photographers and the bags they struggled with contained their heavy shooting gear. This was a photo-shoot outing organised by their photography society and non-members were welcomed to join so I unabashedly tagged along.

For the first time ever, I decided to leave my compact camera in the car and later in the hotel room and took my iPhone instead. I sure travelled light as compared to my 3 friends as they each were carrying with them 2 sophisticated-looking cameras with weight that challenged their neck and arm muscles.

I enjoyed the walk-about in the small-scaled tea plantation with the cool temperature and the scent of the tea leaves lingering in the air. The ladies were lagging behind and Edvin and I found out later that they were busy taking selfies before switching their attention to the landscape.

The tea plantation was commercialised and we had to pay an entrance fee of RM2 per person to go near the tea plants. Looking closely we realised there was actually nothing much to see apart from the harvested tea plants so after we came back up to the entrance, we decided to continue our journey uphill and forego having a cup of tea at the canteen-like restaurant that was packed with local tourists.

a short walk down the steps to get to the plantation

photographer in action, if you could spot him…

among the scented tea plants

We stopped for lunch at Tanah Rata, the largest township on Cameron Highlands. We settled on a trusted restaurant chain for something simple due to Yuen Yee’s delicate tummy. Although the temperature was around a nice 22°C, with the cool breeze suddenly blowing our way the minute we sat down, we all decided it would be wise to dash to the car and get our cardigan and light windbreaker.

We continued the last stretch of the journey after lunch and the final 2km to our destination Brinchang was the most trying with a long crawl on the road caused by the local market just outside of our hotel.

Brinchang, the second largest township on Cameron Highlands is situated 1,450 meters above sea level. It was buzzing with activities and littered with shops, hotels and stalls. We would spend a night at Copthorne Hotel, a fairly big hotel and also one that has seen better days. The room was big and clean enough for us 3 girls and with hot shower so we were contended.

We needed a power nap after the long journey but when we tried to make our way to the famous BOH Tea Plantation at 5pm when we were refreshed, unfortunately we were too late as it was closed half an hour prior to that. As an alternative, we went to the nearby lavender farm instead.

With the high altitude on Cameron Highlands, we were greeted everywhere by huge varieties of brightly-hued cold climate flowers. Although there were beautiful blooms strategically planted and presented at our alternative destination, I was disappointed to find out that the so-called “lavender farm” was just a commercial gimmick with a misleading name and there were only two patches of lavenders in pots that I could spot. Nevertheless, the colourful flowers provided my “shooter” friends with plenty of photography opportunities. 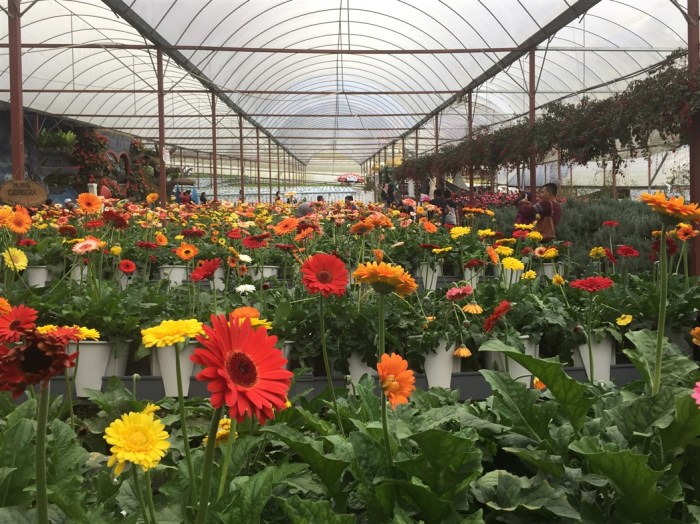 the colourful gerberas dwarfed other flowers at the “lavender farm”

Although it was a trip organised by the Photography Society of Petaling Jaya (PSPJ), the itinerary was unrestrictive and the photographers were free to roam around the area and shoot whatever that captured their attention as long as the shots fit the theme “scenery” of this particular photography outing.

In the evening after we satisfied our craving for a steamboat dinner, I declined to join the group for their Milky Way shoot in 17°C of pitch-darkness. And I also decided to have an extra hour of sleep when they departed early for their sunrise shoot the next morning.

After a hearty breakfast we made our way to the nearby BOH Tea Plantation. Just a short distance after we got on the road leading to the plantation and turned a corner, the photographers especially the girls shrieked in delight with the captivating view of the morning sun on a vast span of layered tea plantation before them. Edvin had to quickly find a spot on the narrow road to park the car so they could get out and grab the golden photographic opportunity. We walked back to the spot which apparently is recognised as the lookout point for visitors to savour the spectacular view of the tea plantation.

The road was narrow and yet, many of the vehicles especially the ones with tourists all fought to get a spot to unload the passengers for them to take in the beautiful view and for the tour guides to pluck the tea leaves and give lengthy explanations on everything related to the plantation.

My friends climbed up and down and struggled to get in between the tea plants with their heavy knapsack to get the best possible view while I walked slowly and absorbed in what the surrounding had to offer. 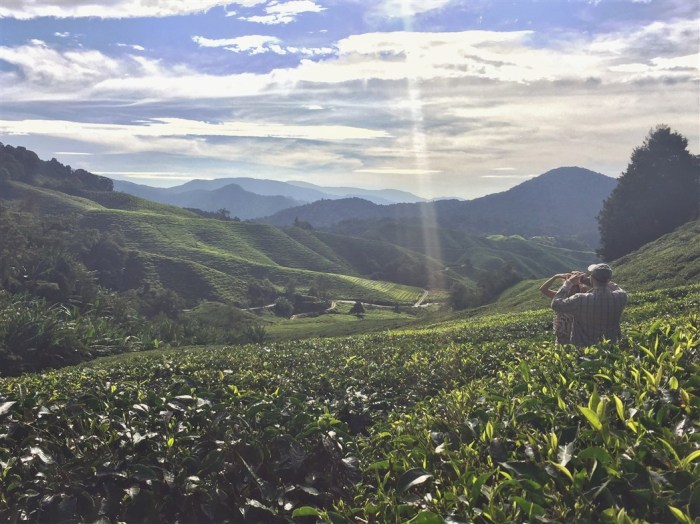 basking in the morning sun

tea leaves in their original form…

When my pals were eventually satisfied with the hundreds of shots they had taken, we made our way back to the car. Although we very much wanted to go to the tea plantation and later to the nearby Mossy Forest, with the traffic building up on the meandering narrow single-track road that demanded great driving negotiation skills getting to both of the places and great patience, we decided to just keep the two items on our to-do-list for our next trip back to Cameron Highlands. 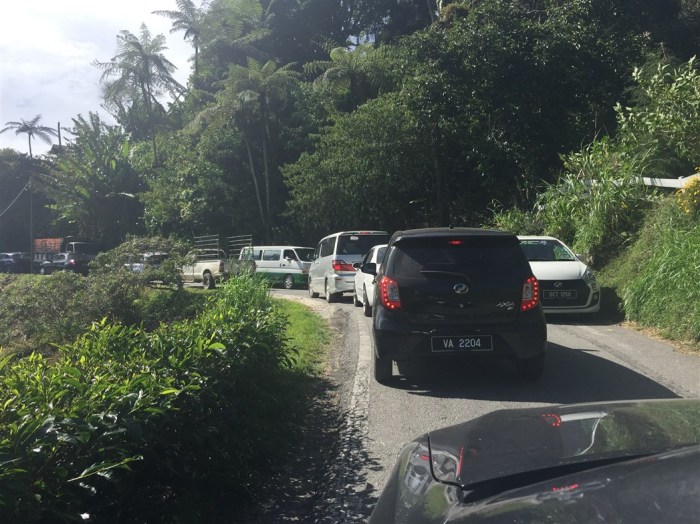 Although we did not get to sip tea at the BOH Tea Plantation and explore its history that dated back to the British colonial era or get a glimpse of the enchanting Mossy Forest, I enjoyed the trip nonetheless simply because I made my first trip to Cameron Highlands in pleasant company and had fun trying hard to be an interesting subject for my friends behind the lenses as I was the only one available in front of the lenses.

My travelling companions captured the rolling emerald landscapes, alluring Milky Way and amazing sunrise over the green hills while I took candid shots of them, the pleasing flowers and the experience of this trip.

seeing the temperate flowers it was hard for me to stay away, so I took some of the hanging ones…

and even the wild ones!

Ellen said she would invite me along when there were interesting trips planned in the future by PSPJ and with that, I reckon I will need to get started on learning how to pose and identifying my best profile so that when I am required to be an interesting subject once again in front of the camera, striking a pose will come naturally and effortlessly.

showcasing one of Ellen’s pictures with an impromptu model

“To me, photography is an art of observation. It’s about finding something interesting in an ordinary place… I’ve found it has little to do with the things you see and everything to do with the way you see them.”
— Elliott Erwitt, American advertising and documentary photographer

Hi, it's Evon here. An enthusiast in discovering all things beautiful and finding little extraordinary delights in a mundane life. A disciple of Christ on a journey of faith, walking in grace and learning to embrace every season of life.